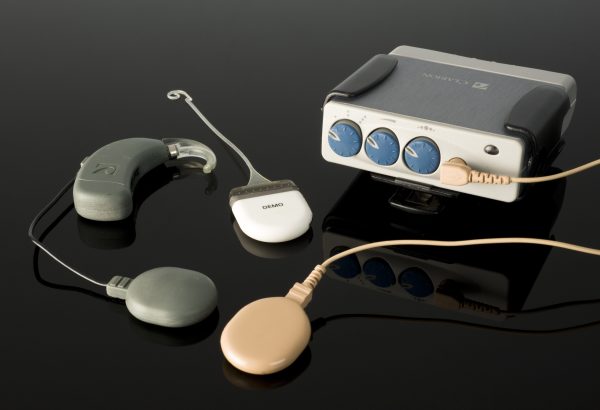 A cochlear implant is a small electronic device that works as a hearing aid. It’s used in cases where normal in-ear hearing aids won’t do the trick or don’t provide enough clarity of sound to understand spoken language, for example.

These implants are placed as young as possible, before hear loss worsens in order to get the best possible result – as such, these implants are most effective when they are done as soon as hearing loss is discovered.

The device that is implanted in the back of the head sits just under the skin, and electronically stimulates the cochlear nerve (from which it gets its name). By doing this, the nerve in question prompts the brain to produce a hearing response.

Attached to the implant itself is an external sound processor, that looks much like a regular hearing aid and can be removed for things like showering or bathing. The internal part stays under the skin.

This type of hearing aid doesn’t restore normal hearing the way a regular hearing aid might do in the elderly, but it can help those who otherwise can’t understand speech at all, or those who can’t easily recognise environmental sounds. This is done by essentially bypassing the part of the ear that doesn’t work as it should.

Living with the implant

After the surgery to place the chip has happened – something that usually requires the shaving of at least part of the head – some rehabilitation is necessary, followed by training on how to make the most of the implant’s potential. Unlike normal hearing aids, which are simply put in, calibrated to the user and can be used immediately, cochlear implants take more of an adjustment.

With the right training though, they can significantly improve the ability of the wearer to understand speech.