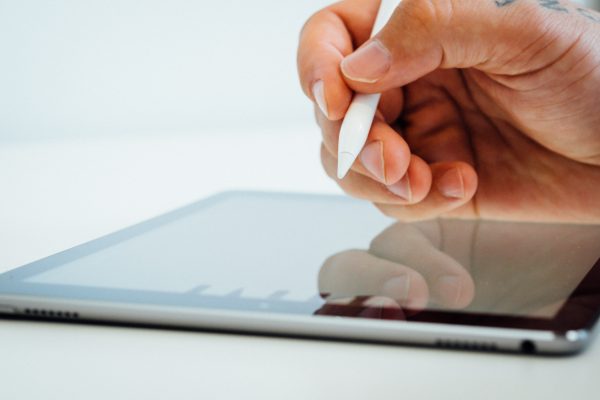 The Apple Pencil has a cylindrical shape with a flat side that magnetically sticks to the side of your device. It is slightly longer with a larger, more blunt tip than the S Pen. The S Pen generally comes with both hard and soft interchangeable tip options, while the Apple Pen only has one hard tip. It only comes in the color white, unlike the various available options for the S Pen.

For tip quality, the S Pen reportedly feels more accurate in terms of a realistic writing experience than that of the Apple Pencil. The S Pen tip is much smaller and pointier, leaving you with more control over what you draw or write. The Apple Pencil is much rounder and larger.

Both the S Pen and Apple Pencil are fairly similar regarding overall performance. Ultimately, the quality of your experience depends on what actions and operations you plan on achieving. Both the Apple Pencil and S Pen have similar capabilities in terms of pressure sensitivity. This means that the applied pressure of the stylus directly correlates with the thickness or thinness of the lines drawn. The same goes for tilt sensitivity, which involves the application of shading through tilting the stylus.

Latency and response time usually correspond heavily with the user’s experience. This is where the Apple Pencil slightly outperforms the S Pen with its 9ms response time and 120hz display refresh rate. With the S Pen, there is a slight delay when touching the screen for when the drawing appears. The difference is very minor, however, it is worth mentioning because it is one of the most important features for smart devices. The Apple Pencil shows no evidence of a delay at all.

Both the S Pen and the Apple Pencil perform similarly with regard to palm rejection. This means that you should be able to rest your palm normally on the screen without it making any unwanted marks, as if writing on a real piece of paper. The issue of parallax is more prevalent for Apple than Samsung products. However, both palm rejection and parallax have more to do with the smart devices rather than the styluses themselves.

If you anticipate using your device for drawing purposes, you may have a better experience choosing the Apple Pencil. This is due to its overall performance rates regarding low latency and input lag. On the other hand, the S Pen better performs the task of note taking. It is more comfortable in terms of grip and weight for most people. The tip is also much smaller, leaving you with more control and precision.

Every Samsung tablet model comes with the S Pen upon purchasing the device. This is not the case for the Apple Pencil, which must always be purchased separately. However, you can still buy a replacement S Pen if something ever happens to the original, which would cost roughly 30 dollars.

The 1st generation Apple Pencil costs about 100 dollars, with the 2nd generation costing about 130 dollars. No matter what version you get, the price for the Apple Pencil is significantly more expensive than the S Pen.

No matter which you choose, the S Pen and Apple Pencil are incredible pieces of technology. How you expect to apply use to them could potentially impact your overall experience depending on which version you use. However, if you are on a budget, you shouldn’t worry too much about getting the most expensive option.