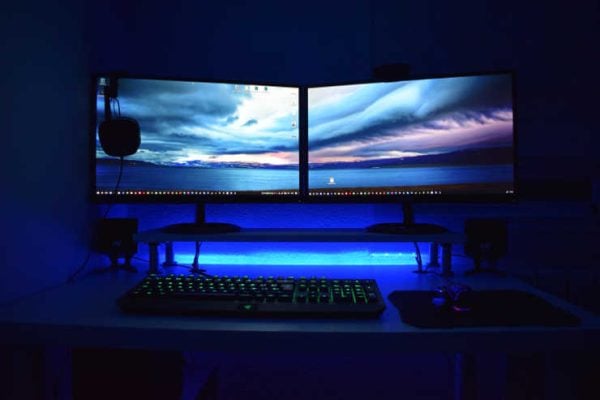 An increasingly common feature in both computer monitors and mobile phone screens is a high refresh rate. Monitors don’t actually show moving images, they display a series of still images. The concept is similar to that of a flipbook, if you show enough images fast enough, your eyes perceive the result as a moving image.

The refresh rate of a monitor and the frame rate of a moving image is measured in either Hz (Hertz) or FPS (Frames Per Second). The units are essentially interchangeable as they are the same measure of “changes per second”. Despite the units being the same, monitor refresh rate is typically measured in hertz, whereas moving images commonly use both units.

Research has demonstrated that at frame-rates below ten to twelve frames per second, the human eye perceives individual images. With more frames being displayed per second, the image is perceived to be moving, although the viewer may still consider the motion to be jerky.

Modern TV footage is typically recorded and displayed at either 50 Hz or 59.94 Hz. This is because television cameras were developed to lock to the frequency of the mains electricity supply. In most of the world, this is 50 Hz, however, in the US, Canada, Japan, and South Korea, the electrical grid runs at 60Hz.

In countries that use a 60 Hz mains power supply, a visual issue called “dot crawl” was identified in black and white TV sets receiving color TV signals when color TV was being introduced. It was discovered that reducing the framerate of the color TV signal by 0.1% to 59.94 FPS significantly reduced the issue. Since then the reduced framerate has stuck, despite there no-longer being a need for it.

The lower the framerate, the less often the image is updated, this leads to all motion appearing juddering or stuttering. This effect is especially noticeable in movie scenes displaying either very rapid movement or rapidly panning shots, as movies are typically recorded at 24 FPS.

For competitive PC gaming, a faster refresh rate monitor can provide a performance advantage. This is because at higher refresh rates, key events such as an enemy moving around a corner, are displayed fractions of a second faster than they would be on a lower refresh rate monitor. The smoother motion also makes it easier to predict exactly where you need to aim to hit the target.

To enable this demand for high refresh rate monitors, it is relatively common to find monitors that support refresh rates of up to 120, 144, and 240 Hz. At CES in 2020, the fastest monitor was announced to have a refresh rate of 360 Hz.

The refresh rate of the monitor typically also requires the footage it’s playing to be of the same high refresh rate to achieve the best results. With video and film archives it is impossible to re-shoot content at higher frame rates, so a technique called frame interpolation is sometimes used. Frame interpolation essentially doubles the frame rate by inserting a new frame between each image, this new frame is based on the original frame both before and after it. This can help older video look much smoother but requires either pre-processing of the footage or enough processing power on the display device to perform the processing in real-time.

VFR prevents an issue called screen tearing. Monitors don’t display the whole image on the screen at once, instead, they start displaying the image from the top down. Screen tearing is where the monitor starts to display an old frame and then partway through doing so, gets a new frame to display, and completes the rest of the image with the new frame. This leads to one image on the screen being made up of two frames that are slightly misaligned with each other due to the camera moving.

Overall a high refresh rate provides a higher quality experience than a low refresh rate monitor. This Is due to the increased smoothness in content it can display. Modern techniques such as frame interpolation and variable refresh rate monitors can provide a smoother result for older content and weaker hardware, increasing the range of improved experiences.

In scenarios based on reaction times, such as competitive gaming, high refresh rate monitors can provide real advantages over opponents. This comes in two parts, the more often a new image is displayed the sooner an important change can be noticed, the increased smoothness of the image also makes it easier for more precise actions to be taken.