There are so many languages out there that it’s impossible to learn them all. You can try learning a few phrases, but one thing is for sure, learning a new language is hard. But why learn the language when Google Assistant can translate for you. Interpreter Mode does just that since you know what the other person is saying at a much faster rate.

There’s no need to install another app or experimental ones. You may have had this feature at your disposal all this time and didn’t even know it. It’s a handy feature when you have to talk to someone in another language and don’t have the time to learn the other person’s language. You can use Interpreter Mode on Google Nest and Home speakers, tablets, smart displays, and phones.

How to Use Google Interpreter Mode on an Android Device

If you don’t have the Google Assistant-enabled, you’re going to need to do that first before using Interpreter Mode. But, if you already have it enabled, all you have to ask Google is for it to be your interpreter. It’s also possible to copy the text translated, just if you want to save it in our notes for future reference. 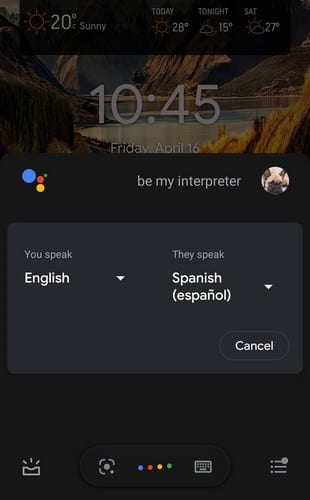 Once Google Hears the foreign language, it’ll translate it immediately. Once you hear it in your language, Google will be listening to continue translating.

When you’re ready to stop using it on your Android tablet and phone, you only need to tap on the X at the top right. You can also add a home screen shortcut for faster access. This is especially useful when you’re visiting another country or regularly near others who don’t speak your language very well. Simply tap on the icon that looks like a phone with an arrow pointing to the sides.

You can choose from 44 languages such as:

Other commands you can use are:

If you can learn a language, go for it. It’s a good way to do some brain training, and you won’t have a panic attack when you don’t have access to the Internet for some reason. But, if you can’t, you know you can always count the Google Assistant to help you out. What languages will you be translating? Share your thoughts in the comments below, and don’t forget to share this article with others on social media as well.