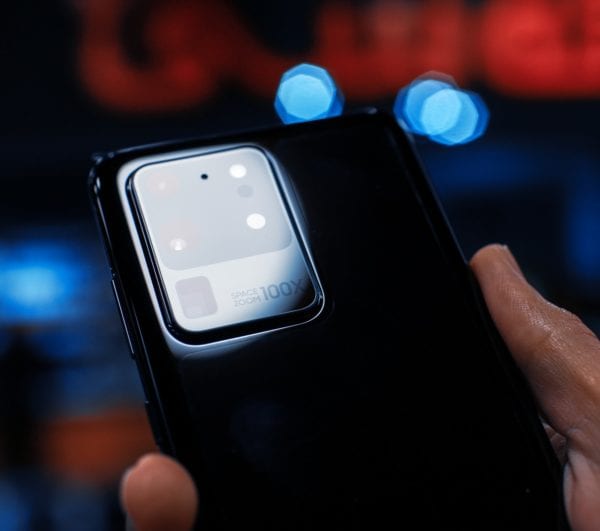 As we all know, Samsung has done it again by releasing the world’s first 100x zoom camera for the S20 family’s flagship. A question arises. Why would they produce a 100x zoom smartphone camera? Well, just because they can. The average Joe probably won’t need it that much. But what are its features?

It’s kind of nice to be able to capture objects that are hundreds of feet away—some people even claim that you can take a ‘brilliant’ moon’s photo with it—but most people won’t find it practical, add to the horrible shaking you’ll doubtlessly encounter when using it by hand.

The 100x zoom’s shots are not crystal clear, but potentially more vivid than you think. If you remember the VGA camera back in the day, that’s more or less the kind of quality you can expect. Samsung claims that the clarity of the picture won’t decrease until 10X zoom, but will inevitably do so as the number increases beyond. This happens since it will enter the digital zoom only mode and not the hybrid by then. At 100x, Don’t be hoping too much you can seamlessly read letters on the object you pick due to the fuzzy image. Colorful objects will be potentially become washed out as well.

Now, we won’t talk further about the quality here. Besides, before you think too much about how the picture would look, you need to actually capture frames in a way that you intend them to. The S20 Ultra is quite heavy for its size, so it’s difficult to hold it steady with your hand. The digital and optical image stabilization is there though so it should help to a little to reduce the jerkiness when snapping a photo.

Nevertheless, your best bet if you aim to use the 100x zoom properly would be by taking advantage of tripods. They are relatively cheap as you can find them at $13 to $43 on Amazon. The phone is about 3 inches wide so make sure you get the appropriate tripod the device can fit. Never mind 100x, even at 30x zoom, it’s already hard enough if your hand is the only thing you rely on. Don’t get me wrong though, even with the tripod on, you can’t completely escape the shakiness but you should still be able to capture a decent frame.

To start using the 100x zoom feature, open the camera app, then tap one of the buttons at the side to change between cameras. The zoom levels will emerge and you can either pinch your finger to zoom in and out or pick the desired zoom levels that show up beside the shutter.  You may want to do it one step at a time—start with smaller zooms then go up from there—if you often fail to focus on the target.

Once the zoom level is at 20x, the mini viewfinder or the ‘thumbnail’ at the top corner will appear to better improve your precision. Don’t forget to use it since you can easily lose focus as the zoom level increases. Alas, things will certainly get tricky if you are trying to capture moving objects such as animals.

The 100x zoom feature may not be super useful, but it’s certainly entertaining. You can capture things in the way that you most likely won’t imagine before using a phone camera. The result may or may not satisfy but I can fairly guarantee that it will be a fun experience for photography hobbyists.

Otherwise, you can always rely on the 10x to 30x zoom to capture faraway objects without sacrificing much of the image clarity.