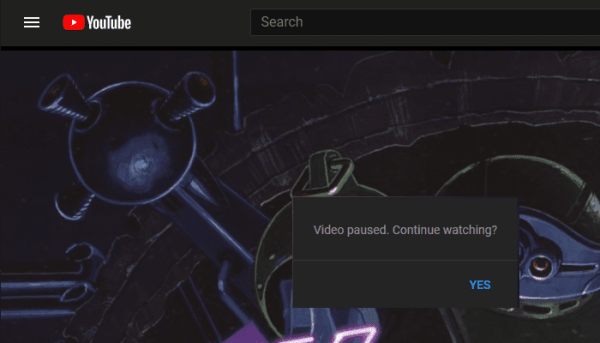 If you’re watching a YouTube playlist or listening to it in the background, then you may occasionally have it pause your videos and ask you to confirm that you’re still watching. YouTube generally pauses to check just as a new video is starting to cause the least intrusion, however, it can also just pause your videos partway through instead.

YouTube pausing videos that you’re actively watching is annoying enough, but it’s generally easy enough to click “Yes”. If a video in the background gets paused, however, you’re likely busy doing something else and may not be able to hit play again straight away.

It is understandable why YouTube would implement this feature, as videos that aren’t being watched result in more traffic and no ad-revenue. Unfortunately, from a user perspective, the feature is really annoying. It’s not even possible to disable the feature through YouTube’s settings. To stop YouTube from automatically pausing your videos you need to install a browser extension.

Tip: Unfortunately, due to the browser extension requirement, the fix does not work for mobile devices.

Turn it off via an extension

There are a number of Extensions that purport to offer the ability to bypass the “Continue watching” message. Unfortunately, not all of them will necessarily work or at least work reliably. In our testing the “AutoTube – YouTube nonstop” extension from Moe Kanan seemed to work, its available for both Chrome and Firefox. There are, however, plenty of other options in both the Chrome Web Store and the Firefox Add-On Store if AutoTube doesn’t work for you.

To install a Chrome extension, find an extension you want to install in the Web Store, then click “Add to Chrome and “Add extension”. The extension will then download and automatically install. To install a Firefox add-on, find an add-on you want to install, then click “Add to Firefox” and “Add”. As with Chrome, the add-on will automatically download and install. Once the extension or add-on is installed it will be active straight away. If you have a tab open with YouTube paused by the “Continue watching” message, they may even immediately resume the video.