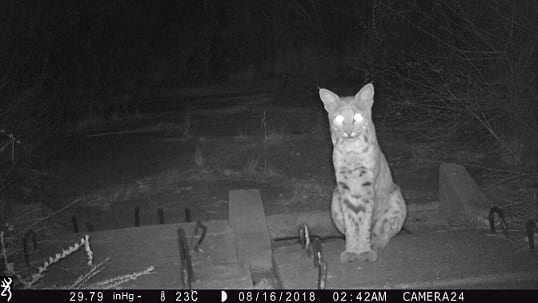 People can typically see very well during the daytime as there is enough light for our eyes to work reliably. However, at night the reduced ambient light means that our eyes don’t function as well. To partially combat this, our eyes use two separate light-sensitive cells, one in low lighting and the other with adequate lighting.

The other type of photosensitive cell in our eyes is rod-shaped. The rods are much more sensitive to light and are used primarily when it is dark as they help us see better. Rods are not particularly sensitive to color which is the primary reason that colors are much less obvious at night.

Rod cells can react to a single photon of light whereas tens to hundreds of photons to activate a cone cell and send the same signal back to your brain.

Tip: Photon is the name for a single particle of light.

Night vision goggles work on the principle of being sensitive to very low light levels. Photons enter the lens and hit a “photocathode”. The photocathode releases electrons which are then accelerated through an electromagnetic field to a “microchannel plate”. The microchannel plate multiplies the electrons hitting it, which are then accelerated towards a phosphor screen. The phosphor screen generates the green-tinted night vision image that most people are familiar with. Green is used because that is the color that human eyes are the most sensitive to.

Thermal cameras use infrared light which is invisible to humans. This is typically in the long-wavelength portion of the infrared spectrum, where roughly room temperature objects emit heat.

Infrared cameras make it easy to identify the presence of hotter or cooler objects than the ambient temperature. Thermal imaging generally uses either black and white or false color displays. Black and white displays typically use white to highlight the presence of hotter objects, a typical example of this is a thermal camera mounted on a police helicopter to track fleeing suspects at night. In this example, the body heat of the person is hotter than the surroundings, making it easy to spot them.

False-color displays assign a color depending on the wavelength of the detected infrared light, with hotter objects being highlighted with brighter colors. False-color displays are typically used when trying to use a thermal camera to measure the temperature of an object, as it is easier to identify more subtle variations in temperature.

Some night vision devices use active illumination to provide extra light for the thermal camera to detect. This is essentially the same as shining a torch so that you can see, however, the light being used is in the infrared spectrum and so is invisible to humans. The extra illumination helps make it easier to achieve high-resolution infrared images and so is often used in conjunction with security cameras.