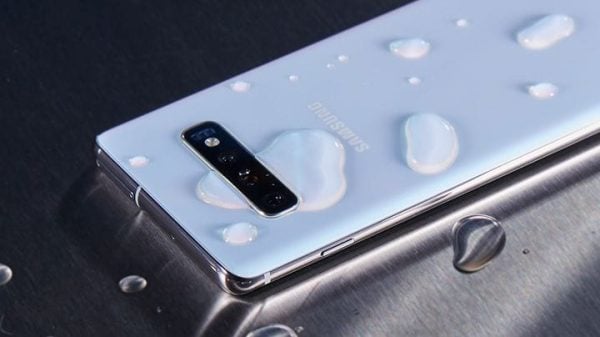 One of the three models of the flagship Galaxy S10 series, the S10e is the smallest of the three models. The e is short for ‘essential’, and it offers most of what the other two models do – just cheaper, and with somewhat lower specs.

While the phone misses some of the bells and whistles that the top-tier models have, it’s a force to be reckoned with and well worth the reasonable price tag on it.

The first and most obvious difference between the S10e and the bigger S10/S10+ is actually one of the things that makes it most convenient – its size. Featuring a 5.8-inch screen, the phone can comfortably be used with one hand by most people, and for those with smaller hands, the S10e can offer a comfortable experience.

Like all S10 versions, the S10e features a convenient AMOLED display and can be woken from sleep with a simple double-tap. Quality-wise, the screen is as good as they come – with a 2280×1080 438 PPI resolution, the screen is more than appropriate for the small size. Perhaps the only downside is the small punch-hole camera in the top right corner – it’s not too noticeable, but it does interrupt the otherwise perfectly good screen. Compared to models like the competing iPhone XS and its black top bar, the punch-hole is significantly less noticeable.

A little smaller than the other two models, the S10e offers a 3.100mAh battery. That will last most users through the majority of their day, especially when coupled with the speedy 15W fast charging. Samsung added another cool feature – the S10e has Wireless PowerShare. That means that it can function as a charger itself – you can use it to charge your wireless headphones for example, or you can charge another phone, as long as it supports wireless charging.

A big issue when it comes to picking a new phone, camera specs aren’t to be scoffed at. The S10e has two back cameras with 16 and 12 MP respectively. While that is one camera short of the two top-end phones, it’s a huge upgrade over the S9 from the year before, not to mention above much of the competition as well. The 10MP front camera is also well up to its task.

For those looking for a balance between price and camera performance, the S10e is a fantastic choice. It doesn’t have some of the telephoto and wide-angle options that the three-camera S10+ has, but for most users, that doesn’t make a difference at all.

In US-models, the S10 series premiered the Snapdragon 855 chipset, whereas the rest of the world got an Exynos 9820 instead. Both offer comparable performance and feature eight cores each, along with either 6 or 8GB of RAM, placing it well in the middle of the field.

The S10e is available both as a dual sim model and a single one – in either case, the second ‘sim’ slot can also be filled with a 512GB MicroSD to expand on the 128 or 256GB default storage. Compared to other models, that is on the slimmer side, but it still offers plenty of storage for most users.

The (lack of) bells and whistles

In order to justify the smaller price tag, Samsung had to drop a few things – perhaps the most prominent thing would be the lack of in-screen fingerprint sensor. The phone has a side-button with that sensor instead – perfectly usable, but slightly less convenient.

The phone is also noticeably thicker than the other two S10 models. The overall weight remains light, but the phone does feel a little bulkier, despite (or maybe because of) the smaller screen size.

Speaking of – that smaller screen does make it a less appealing option for mobile gamers. Compared to larger models, the screen simply doesn’t look as good, and it also reduces the space that would be used for game controls. For most other media-purposes, the S10e is perfectly adequate – in fact, the accessible headphone jack makes watching videos or listening to music with headphones a pleasure.

The S10e is a solid choice for anyone looking for a reasonably-sized and reasonably-priced smartphone. It offers almost all the functionality of the much more expensive flagship models, and when it comes to RAM and CPU actually features the same specs as its pricier siblings.

While the phone isn’t exactly designed for playing games or watching videos, it more than stands up to the test of casual use – hardcore gamers better look elsewhere, as the small screen can be an issue for game controls.

The fantastic cameras in the S10e make up for some of the other missing features – both the front and back cameras are powerful and take fantastic pictures in almost any lighting. All in all, the S10e is a good choice for anyone not willing to pay top dollar for their next smartphone – and for those that want to use it with just one hand.