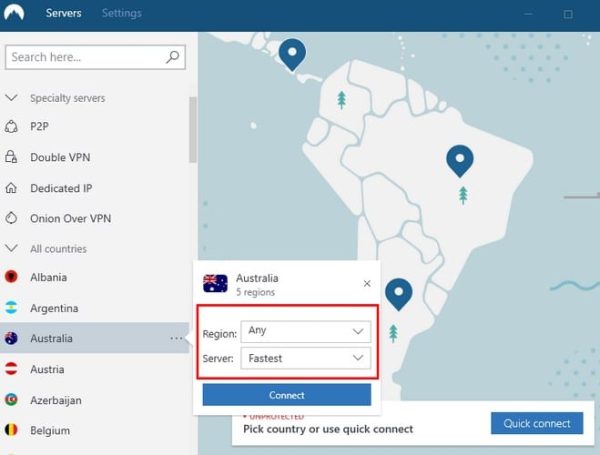 If you’re going to spend your hard-earned money on a VPN, you want to be sure that you’re getting the best service for your money. This comparison of Avast SecureLine VPN and NordVPN will look at both features as well as the cost to determine which is the better VPN in 2020.

Both NordVPN and Avast offer the best available 256-bit AES encryption. This encryption keeps all data sent between your device and the VPN server secure and private. Encryption is a process of scrambling data using an encryption cipher and encryption key, in such a way that the original data can only be read if you have the encryption key.

Avast offers 55 VPN servers based in 34 countries. NordVPN on the other hand offers more than 5600 servers across 59 countries. The number of servers that NordVPN offers, gives a huge amount of flexibility to users. There’s a much larger list of countries that you can use if you want your traffic to appear to be from a certain country, there’s also a much better chance that there are servers available in a city near to you if you don’t want to use foreign servers.

Both VPN providers advertise a “no-log” policy, meaning that neither monitor nor log your usage. NordVPN’s policy is a bit stricter than Avast’s though. Avast log timestamps of your connections, some IP address information (but not your full home IP address), the amount of data you send and receive, what operating system you use, what version of the VPN client you use, and if you use certain features such as auto-connection. While this data can’t be used to track your browsing data, it’s a lot of information for a “no-log” policy. In comparison, NordVPN doesn’t log any user information, just overall server load so it can recommend less busy servers.

Avast SecureLine VPN and NordVPN both offer VPN clients for PC, Mac, iOS, and Android, including Android smart TVs. NordVPN also offers VPN clients on Linux, Chrome, and Firefox. The selection from both providers is pretty good but Avast’s lack of Linux support may be a big factor for some people.

Both providers offer an optional VPN kill switch, that can block any network communications from your device if it disconnects from the VPN. A kill switch is an important safeguard feature that prevents any data from being leaked if your VPN ever disconnects.

Avast offers support for P2P services and torrenting through eight of its 55 servers. All eight servers are based in either the US or Europe. NordVPN has hundreds of VPN servers around the globe that are specifically optimised for P2P and torrenting traffic.

NordVPN can bypass Netflix’s anti-VPN blacklists and unblock 12 Netflix regions, including Netflix US, UK, and Japan. Unfortunately, Avast doesn’t unblock Netflix in any region. You may find other streaming sites vary in availability but NordVPN will be much more likely to be able to provide access than Avast.

Two other features that NordVPN offers and Avast doesn’t, are the option of a dedicated IP address and a double VPN service. A dedicated IP address is a single IP address, assigned to only you. This should prevent your traffic from being identified as being from a VPN but can also make it easier for your browsing activity to be tracked. The double VPN service connects you through two VPN servers in a chain, neither server knows both who you are and what you’re connecting to making it even harder to monitor your internet usage,

Nordvpn offers one-month, one-year, two-year, and three-year plans ranging from $11.95 a month to $3.49 a month. Avast only offers one, two, and three-year plans for between $4.99 and $3.99 a month. All NordVPN plans provide a licence to cover six devices. Avast in comparison supports up to five devices for the prices above, but it also offers a single device licence for $1 a month less than its five-device plans. Avast also offers a seven-day free trial that doesn’t require any payment details.

Tip: While all plans have a monthly price shown for ease of comparison, the full price of the plan is required upfront.

Both Avast and NordVPN offer a 30-day money-back guarantee on all purchases.

Overall NordVPN offers a better service, with a wider list of available servers and locations, better platform support, the ability to access Netflix and other streaming sites, a better no-log policy, the option of a dedicated IP address, and a double VPN option. On top of all of these extra features, a three-year plan covering six devices from NordVPN costs less than the comparable three-year plan covering five devices from Avast.