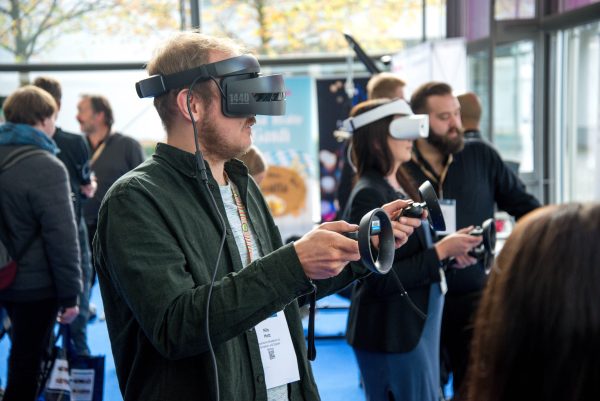 The revolutionary Snapdragon XR2 by Qualcomm is the first platform to combine AI technology with 5G capabilities. Released at the end of 2019, the XR2 was announced at Qualcomm’s tech Summit last summer and has been causing waves ever since.

The Snapdragon XR2 platform was built for premium Android devices, and they provide more than just a faster connection. The XR2 will include improved CPU/GPU performance and exponential development for both bandwidth and resolution. Interestingly enough, the XR2 is not replacing the XR1, just service different devices.

So what can you do with this new platform? We suggest trying out a few of these apps with your faster, clearer VR experience.

These are the top 5 virtual reality apps to keep track of with Snapdragon XR2’s new shift into 5G capabilities. All these apps are available for android phones, which are Snapdragon XR2’s target devices. As they upgrade into the faster speeds and stronger performance, these will be the names to keep an eye on.

While seemingly simple, Google Daydream takes you on incredible adventures, exploring the world around you. You can discover a world of dinosaurs and go deep sea diving with giant sea turtles.

Daydream offers several app games as well, like Hungry Shark, Virtual Rabbit, and Eclipse: Edge of Light. They have also partnered with big names like BBC and New York Times, to provide VR experiences with them as well.

SketchFab is perfect for VR users interested or experienced in 3D design. SketchFab itself is used for showcasing, buying, and selling 3D art and models. It brings designers together from around the world to display their artwork.

Their VR option allows you to examine and have an interactive experience with these incredible models.

You’d be hard pressed to find someone who has never heard of YouTube. But their latest VR options are quite impressive. They are certainly something to keep an eye on with Snapdragon’s 5G movement.

YouTube VR offers a ton of games and apps in various categories, including Travel, Thrillseekers, Gaming, Music, Storytelling, and the VR Creator Lab.

Their videos offer an immersive experience, allowing you to visit UNICEF schools in Ghana. Or you can learn how volcanoes affect the earth’s climate. The opportunities for discovery are practically endless.

Available in the Google Play Store, Incell VR is an unusual game that science and adventure. Meant for students, users are transformed into a micro-sized organism.

Players can see inside a human cell while solving puzzles and playing shooter-style games. Incell VR has us wondering how long before we start to see virtual reality in classrooms. Could this be the next big thing in grade school education?

The Future of VR

Yes, the Snapdragon XR2 5G is still in its infancy. It’s had less than a year on the market, but already we are seeing impressive strides in game design and user experience. And the world can’t wait to see what happens next.